With the help of 320-pound offensive guard Elgton Jenkins, Green Bay Packers star running back Aaron Jones showed the world a very special piece of jewelry he was wearing under his #33 jersey during his team’s 32-18 thumping of the Los Angeles Rams in Saturday’s divisional-round playoff game. 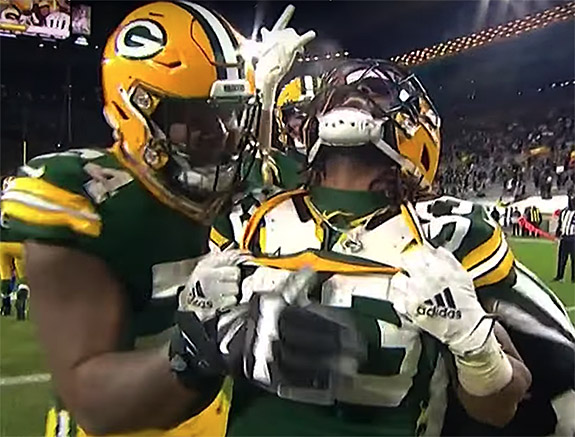 On the very first play of the third quarter, Aaron Rodgers handed off to Jones, who busted through the middle of the line and scampered 60 yards to the Rams’ 15 yard line. Two plays later, the man they call “Showtyme” plunged one yard into the end zone, giving the Packers a 25-10 lead. 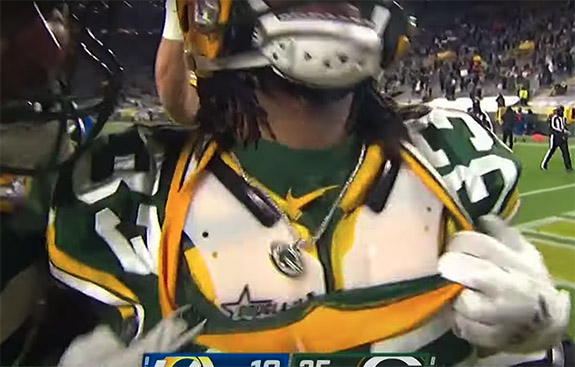 As he celebrated the touchdown, the elated four-year veteran attempted to dig into the neckline of his jersey, but was having trouble getting a grip on the jewelry underneath because his gloves were too bulky. Fortunately, Jenkins — the 6′ 5″ lineman — knew exactly what to do.

The spectacle caught the attention of Emmy Award-winning TV and radio personality, Bryant McFadden, who mentioned the celebration and the jewelry while hosting a post-game analysis for CBS Sports HQ, the network’s streaming video sports channel.

“He scores a lot of touchdowns, man, and he also has a lot of cool jewelry,” said McFadden. “That’s awesome…that little Green Bay [logo] in diamonds. I couldn’t rock it, but he can.”

Jones shared the Fox video clip on his Instagram Story while giving a shoutout to Jenkins and the jewelry firm that designed his necklace. He wrote, “My bro @elgton74 had to pull it out for me! @shopgld”

@shopgld is the Instagram handle for GLD, a Miami-based jewelry firm that specializes in over-the-top, diamond designs for celebrities and sports stars. A sample of the Packers’ logo design is shown on the company’s website.

GLD shared the Fox celebration clip on its Instagram page along with this caption, “Shout out to the legend @showtyme_33.. Yea you see that packers chain baby. Every TD it’s coming out.”

Aaron Rodgers and the top-seeded Green Bay Packers will take on Tom Brady’s Tampa Bay Buccaneers in pursuit of a Super Bowl title.

We’re guessing that Jones’s Green Bay bling will be making a few more cameos along the way.

See Jones’s touchdown run and end zone celebration, below. The sequence starts at the 18:30 mark.