Gem Gallery Virtual Tour: This Emerald Was Worn by the Rulers of Baroda

An exquisite 37.8-carat emerald once possessed by the royal rulers of Baroda is the next stop on our virtual tour of the Smithsonian’s National Gem Collection.

The Chalk Emerald is so special, in fact, that it is the singular occupant of a wall case titled “A Royal Legacy” on the second floor of the Janet Annenberg Hooker Hall of Geology, Gems, and Minerals.

Normally, the hall hosts more than six million visitors annually. But with all the Smithsonian museums in Washington, DC, remaining temporarily closed to support the effort to contain the spread of COVID-19, we’ve been offering these virtual tours. 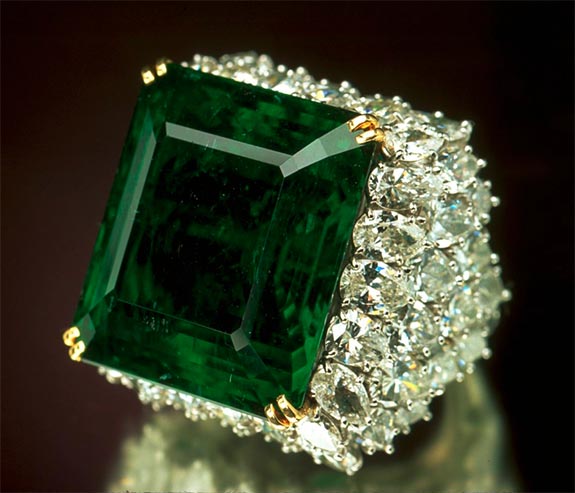 Previous stops on the tour have included “Gifts from Napoleon,“ “Stars and Cat’s Eyes,“ the Logan Sapphire, the Dom Pedro aquamarine, the Steamboat tourmaline and a collection of enormous topaz.

Here’s how to navigate to the exhibit called “A Royal Legacy.”

– First, click on this link… The resulting page will be a gallery called “Geology, Gems & Minerals: Precious Gems 1.”

– Click the double-right arrows once to navigate to the gallery called “Geology, Gems & Minerals: Precious Gems 2.”

– Click and drag the screen 180 degrees so you can see the back wall of cases.

– Touch the Plus Sign to zoom into the exhibit titled “A Royal Legacy.”

(You may touch the “X” to remove the map. This will give you a better view of the jewelry. You may restore the map by clicking the “Second” floor navigation on the top-right of the screen.)

The panel next to the exhibit explains how the royal rulers of Baroda, a state in India, once owned the emerald in the ring: “It was the centerpiece of an emerald and diamond necklace worn the Maharani Saheba, who passed it down to her son, the Maharajah Cooch Behar. In the 20th century, the emerald was recut from its original weight of 38.4 carats and set in a ring designed by Harry Winston, Inc.” 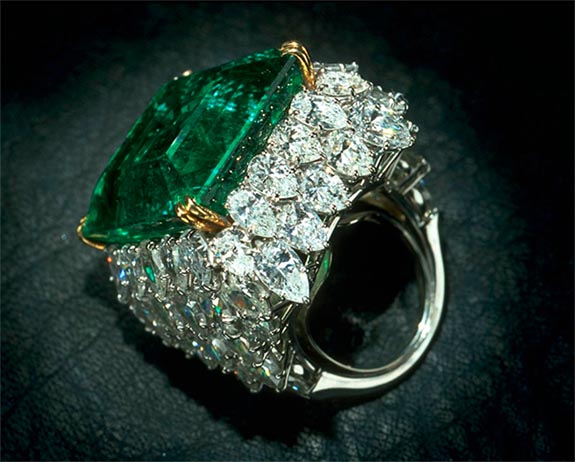 The extraordinary ring was purchased by O. Roy Chalk, the real estate, transportation and media mogul, for his wife, Claire. The couple generously donated the Chalk Emerald to the Smithsonian in 1972, where it has been on exhibit ever since.

The Chalk Emerald’s superb clarity, color, size and regal lineage contribute to its status as one of the world’s finest emeralds.

The gem was sourced in the famous emerald-mining area near Muzo, Colombia — a destination widely known as the world capital of emeralds. The Smithsonian reported that emeralds were cherished by the indigenous people of Colombia for at least 1,000 years before the arrival of Spanish conquistadors in the 1500s.

The riches coming from the Colombia mines were of great interest to the Mughal rulers of India, who were captivated by the green gems. This demand sparked a robust gem trade linking the New World to the Middle East and India.

Emerald is the most valuable variety of the beryl family and is known to display a wide variety of visible inclusions, which are referred to as “jardin” (French for “garden”). These imperfections do not detract from the stone’s beauty but, instead, give each stone a unique fingerprint and distinct character.